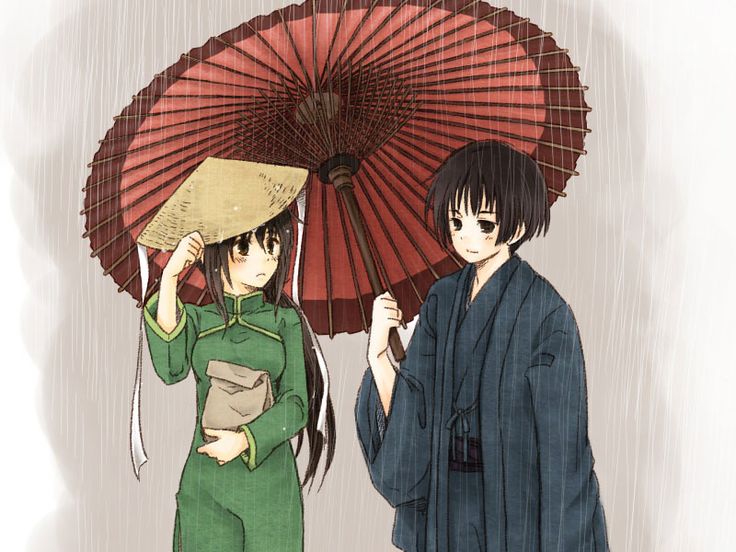 Introduction: This little fic was inspired by the real life story that was raging in the news in Japan during 2007-2008. It’s extremely late to talk about this, but better late than never because it’s still quite fascinating to me to this day.
You can read more about it with this link if anybody is interested 😉 https://www.stippy.com/japan-waiwai-archives/tokugawa-clan-looks-to-slam-the-gate-on-future-chief%E2%80%99s-marriage-to-foreigner/

The quarter monthly meeting for the Asian countries were boisterous and loud as usual. Mr. China was happily offering his buns and dumplings to everyone whilst bragging about how everything everyone else own actually came from his “Middle Kingdom.”
Mr. Philippines and Mr. Thailand were occupied with some sort of loud argument with Mr. Indonesia cackling in the background.
Ms. Taiwan was lamenting noisily on where Mr. Japan could be, both Mr. Japan and Mr. South Korea were mysteriously absent, Mr. North Korea was sitting in his own dark corner, staring creepily at everyone and so on.

In the ladies corner, Ms. Malaysia and Ms. Singapore were chatting away about something no one can hear as they were merely whispers. Fortunately for the nosy average, such whispers turned up its volume to normal voice within hearing range.

“Didn’t you hear?” Singapore whispered and looked around the room conspiratorially.

“What? Just say it,” Malaysia hissed.

“The infamous Tokugawa Shogunate in Japan that still exists today, famous for their xenophobic ideals?” Singapore began with a little meddlesome smile on her lips. “I heard that the head family had a huge following out with their son who is supposed to be the heir to the clan.”

“What?! Why?” The other Southeast Asian country asked.

“Rumors in the news has it that the reason was because the heir, Iehiro Tokugawa, refused to marry a Japanese woman. They claimed that he fell for a Vietnamese bird instead! The country is currently in a controversial uproar over that…The lovey-dovey, forbidden couple is currently residing in Thailand.”

The two female nation’s conversations were now being actively listened to curiously by most of the room. Mr. Japan was still late and has not made himself present to the conference. Ms. Vietnam who could hear everything despite not really wanting to shrunk back in her seat, trying to avoid eye contact with anyone. Ms. China snapped her intricately designed fan shut in disapproval. She decided to scoot her chair closer to the two other ladies to join in the gossip.

“That’s preposterous. I am not even Japanese myself, but I do have the fixed belief that one’s ethnic should stay within the ethnic and not cross breed,” She said sharply, red painted lips not missing a beat.

“You are of such firm opinions, Ms. China,” Ms. Malaysia uttered, chuckling softly. A porcelain cup clacked gently on a porcelain plate sounded from across the table.

“I concur with Ms. China,” A melodious voice spoke and eyes turned to Ms. Japan. The reserved and self-possessed female country lived up to all her reputations which she proudly showed in outward appearance. Her glossy, long black hair was styled in a ‘Hime cut.’ She wore a rather simple, but extremely elegant, lilac kimono and any makeup she had on was applied in moderation. Her manner was as graceful as it was distant.

Vietnam felt herself growing all the more small, suddenly finding the little designs on the pine table very interesting.

“Iehiro-san was indeed very selfish in underestimating the Tokugawa family title. That family has uphold our nation’s honor and history since the 1600s. They were what protected us from foreigners during the feudal era. Their family line has protected itself to remain purebloods for a long time. In marrying a blatant foreigner, Iehiro-san has disgraced the Tokugawa Shogunate as well as, I dare say, myself.”

The Japanese female took a sip of tea from her cup, delicately. Her tone was crisp and frank yet no matter how cold her words were, none of the nations could really say anything back as this had been their culture for a long time so any implications went without saying.
Perhaps, Vietnam felt just the tiniest bit of resentment bubbling within her, but she wisely kept her mouth shut and prayed to Buddha for patience.

“Woah, woah, woah!” A cheerful male voice chirped, accompanied by laughter. Mr. Taiwan draped an arm around Ms. Japan’s surprised shoulders.
“I didn’t think you were this rigid, Ms. Japan, but I guess your stoicism was what I fell in love with~”

Ms. Japan jolted from her seat before slightly frowning at the male, Asian country.

“Mr. Taiwan, just what are you doing?” She asked, exasperated, but even when annoyed, everyone could see the fondness in her dark eyes when she looked Mr. Taiwan.

“What are you going to do when we get married, huh? It’s not like I’m Japanese and didn’t you say a few evenings ago that you reciprocated my feelings anyway?”

That stumped the female nation and she could only respond with a mild blush. Ms. Vietnam straightened up and any feelings of uneasiness began to go away. She could not help but watch the scene with a light laugh from her own.
After a moment of calming down, Ms. Japan cleared her throat, fixing her intense gaze on Ms. Vietnam.

“Anyway, as I was saying. Ms. Vietnam, I expect that you would at least be responsible enough to uphold our honor in that you let the bride from your country realize it is her obligation to learn the Japanese culture, language, the Tokugawa history and her responsibility to the household inside out.”

Before the Vietnamese female country could respond, the door opened with Mr. South Korea and Mr. Japan walking in; both men looking ever tall, dignified and handsome. In Mr. Japan’s hand were several newspapers.
As he sat down, he easily spotted Vietnam sitting sheepishly in the corner, thinking she could hide from the world with her tail tucked between her legs.

“Ah Ms. Vietnam, you sure do know how to cause me trouble,” The Japanese male stated with an amused quirk of his mouth, his hands opening the folded newspaper. That line sparked something in her for some reason as her body perked up.

“Wait, hold the phone. How come you and everyone else are acting like it’s my fault?” Vietnam said huffily with crossed arms. Mr. Japan replied with a shake of his head and a sigh.

“What a load of work. Now I have more to add on to my already long list of chores including appeasing my people because-Well…” The Japanese male eyed her with a teasing glint in his eyes.

Vietnam sputtered indignantly; her face flushed and tips of her ears red.

“Don’t finish that sentence,” She snapped. “Fine then. I’ll just travel over to Thailand this weekend and break her off from him!”

“Ah, you seriously don’t have to do that-“ Mr. Japan interrupted her suddenly, his eyebrows raised in slight alarm, although he still had a good-natured grin on his face. Vietnam got the clue and grew smug.
Japan then poured tea for himself, sipping the warm, aromatic drink letting out a satisfied breath. He opened his eyes and both him and Vietnam exchanged knowing smiles.

They both knew the gist of it after all and the two nations respected each other two much to tarnish anything now. Japan and his government may not have formerly and properly apologized to Vietnam for their deeds long, long ago, but she admitted that their relationship is growing stronger every day. Perhaps old wounds could mend as well.

What the Tokugawa son and his bride had was also genuine love for each other to cross any boundaries formed by the close-minded.

“Okay…So is this even a meeting at all or what are we even doing?” Hong Kong’s bored voice piped up.

Chuckles and snorts followed his musing as things commenced.